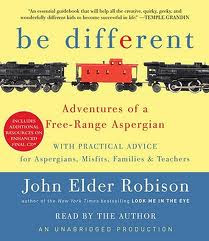 Anyone who has ever tapped on the window of, but cannot open the door to the world of normalcy (wherever that is) owes it to themselves to buy Be Different: Adventures of a Free-Range Aspergian with Practical Advice for Aspergians, Misfits, Families & Teachers by the luminously wise John Elder Robison, author of Look Me in the Eye, a 2007 memoir that well earned its place on the New York Times bestseller list.

I’m on the autism spectrum, myself. Like Mr. Robison I was diagnosed in my forties, which means I was born long before Aspergers was generally recognized as a diagnosis, too early for effective intervention. For me Be Different, the follow-up to Mr Robison’s ground-breaking memoir Look Me in the Eye offers more a confirmation than a revelation.

Sometimes I recognized myself and laughed. Some sections, like Managing Sensory Overload, figuratively hit the perfect note with me, when Mr. Robison describes his technique of isolating the music of one instrument at a time to avoid being overwhelmed by the sensory stimulation of an entire orchestra. (The only downside, of course, is when the one musician commanding your attention at the moment plays or sings off key. Ouch.)

Sometimes I recognized myself and felt my ears burning. In the (Not) Reading People chapter I found myself nodding vigorously at Mr. Robison’s memory of his inability to read any but the most exaggerated and frequently repeated facial expressions, and the confusion that deficit caused. If, as I had been told, a smile signaled friendship then I wondered, like Mr. Robison apparently did, how a person’s threatening actions could so contradict their friendly facial expression? Bullies often smile as they are bullying, so if another child came towards me smiling, it was hard for me to predict whether they were about to say hello or push me into the dirt. Eventually, I learned techniques similar to Mr. Robison’s to compensate, but my epiphanies seemed to come later in my life than they did in his. I’m relieved that he’s quicker on the uptake than me, and better at articulating the rules it took me so long to learn – and that he is teaching what are no less than survival tactics to the current generation of autistic people, which includes my own son.

Be Different presents a new opportunity to get acquainted with this author, in a book that’s every bit as compelling as his first. Yet here the tone is…Different. Like his memoir the incandescent writing is deeply personal, accessible to anyone who has ever felt like an outsider for any reason. But this time around, Mr. Robison acts as a kind of Autistic Aesop; he writes less a scorching memoir and more a series of directly illustrative biographical vignettes. There is a clear value here of the (literally) underlined morals of the stories to those of us insensible to the subtlety of, well, subtlety. If you’re on the autism spectrum or parenting a child on the spectrum, Be Different functions as a manual, just as its sub-title promises.

If you have no connection to the autism community, then I’d argue that you need a copy of this book even more than those among us who do. The diagnosis rate is rising so quickly that if you don’t already know someone autistic, you will soon. Bosses, shopkeepers, bus drivers, co-workers, and neighbors will all benefit from an heads-up to understanding that quirky person who will at some point undoubtedly pop up in their lives -- not wanting to offend, but somehow often offending; not looking to take offense but somehow taking it anyway. On the spectrum or off, it's hard to quell hurt feelings, but using Be Different as a guidebook we can all navigate through misunderstandings to compassionate clarity.

There are at least two generations of autistic people like the author and me, folks who never got a lick of intervention. All of us who often swear we were born on the wrong planet are trying to meet the non-autistic population halfway, but we need the help of non-autistic people to make a place for ourselves in this world and a meaningful contribution to it. The insight we all need, whether we’re autistic or not, can start the minute we start heeding the advice of one of autism’s most effective spokespeople.

You can find Be Different in any store or site that sells books. My website doesn’t sell books, so be assured, I’m not making a dime from this sales pitch. I just think Be Different will make a difference in your life.
Posted by ASCD at 2:14 PM

Email ThisBlogThis!Share to TwitterShare to FacebookShare to Pinterest
Labels: aspergarian, aspergers, autism, Be Different, John Elder Robison, Look Me in the Eye